SHUT THE FUCK UP! WE’RE AT WAR!

Are you a traitor for not agreeing with your government?

Are your words of protest helping the enemy?

Are you an agent of a foreign power even if you don’t know it?

Even if no war has been announced?

Perhaps you are supposed to take your cue from the media.

Don’t you hear what they’re saying?

Have you heard a good word said about Russia or China lately?

You surely can’t have missed how the major league social media people are being hauled over the coals about content.

Or how those who look after broadcasting rules have been looking for every possible way to ban RT (Russia Today) that they all say is propaganda.

Perhaps you missed how the BBC and Reuters were exposed recently for taking money from the British government to help with their plans to “educate” Russian journalists to create the “proper” narratives in Russia?

Havn’t you got the message yet?

If you live in the USA you surely know that commentators with large audiences are being denied income for videos that don’t quite have the “right” content.

Fact checking entities that lean toward a certain direction in doing their checking have sprouted as a new industry and ‘cancel culture’ is thriving. The drive to homogenize speech is well under way.

You could be forgiven for thinking that the western world is turning into the black and white world of oppression, censorship and denial of free speech it once claimed was the entirety of the USSR, the Soviet Union.

If you have read George Orwell’s ‘1984’ you will surely also see a few parallels in it to what’s happening now.

Perhaps you are not quite aware how far things have already gone and are unaware of the implications of what has already transpired.

We are being watched, monitored and judged... constantly. Not those of us with tiny audiences yet. Not yet. But how long might it be before we are?

The USA and UK are at war with Russia and China. Not that there has been an official announcement and it is likely there never will be. But they are at war with them and they are seeking every single means possible to attack them.

They don’t want a single positive thing said about either one of them. Look at how Russia’s Sputnik V vaccine and the Chinese equivalent are being treated for instance. Look at any recent article by a mainstream journalists and the statements made by the U.S. State Department or the UK’s Foreign Office. Search in vain for anything positive, anything that looks like an attempt at diplomacy. You won’t find anything.

We are in ‘The Ice Cold War’ where no diplomacy is considered good diplomacy. Diplomacy is now composed of western demands and accusations, nothing more.

This is how it is when nations are at war.

The enemy must be demonized, treated as sub-human, evil in both intent and act. Monsters and criminals, plotters trying to harm you, devious, untrustworthy and requiring elimination.

Vladimir Putin and the Chinese Communist Party are being treated in exactly this way. China has become a relatively recent case for this treatment. But Vladimir Putin has suffered it since 2007. His crime? Insisting the Russian Federation should exist as an independent, sovereign state with its own foreign policy and not a controllable minion nation governed by others in a unipolar world.

Before his speech in 2007 making plain this was how he saw things he has been public enemy number one in the West. Before this time, from 2000 that is, he was treated as a friend, respected, lauded even. After it he was persona non grata in most of the West.

So, those who admire him, as I do, can be treated with suspicion, suspected of trading in disinformation, of being ‘Putin’s Puppet’ or a ‘Russian Agent’.

But I am a minor player, a nobody, not even an irritant, unworthy of attention.

Those with an audience of many thousands however, watch out.

Max Blumenthal, Aaron Mate, Benjamin Norton, Anya Parampil, John Pilger, George Galloway, Lee Camp, Jimmy Dore, Kim Iversen and a growing number of others however, watch your backs. You have a target there. You are in their cross-hairs.

The elites of the West are at war and are not playing around. This is serious. All the power they have accrued over the last several hundred years is now at stake. China is rising fast and once she surpasses the economic power of the West to a certain degree then everything changes. The diplomatic and military power of the USA, UK and their allies relies of their combined economic power.

Why do you think the USA opposes Russia’s ‘Nordstream2‘ pipeline so very hard with innumerable sanctions applied?

Why do you think China is facing a rising tide of verbal and economic attacks from the USA, UK and most probably soon, from the EU?

China’s ‘Belt and Road Initiative’ to create trade superhighways by land and sea into the heart of Europe is going to change the geopolitical landscape completely.

And there goes the power the West has had over others due to one single project progressed steadily over the next two to five years.

The “enemy” is at the gates.

And the UK and USA are pouring metaphorical boiling oil over them.

So do you think they appreciate your praise for their “enemies" or your attempts to be fair?

For them you are also an enemy. The enemy within.

So what do they want you to do? What will they increasingly TELL you to do...?

SHUT THE FUCK UP! WE’RE AT WAR! 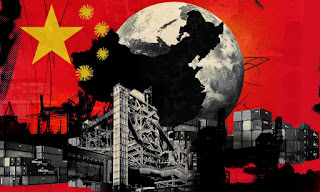 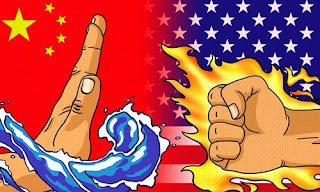